In May 2002, an article on the Annual Town Meeting Warrant asked voters for permission to seek financing for $3.75M to replace 8 old decommissioned wind turbines with two new, larger wind turbines. The Article did not pass.

On February 11, 2003 the town held a Special Town Vote asking voters via Ballot Vote to vote on a Non-Binding Question "Do you favor the Board of Light Commissioners' plan to replace the eight (8) existing wind turbines with two (2) new larger wind turbines mounted on towers 213-230 feet high?"; which the voters voted 74% in favor of (605 out of 818 votes).

The MMLDWECC owned and operated the two Fuhrlaender 1500 kW wind turbines on the south flank of Wachusett Mountain in Princeton until March 2015. In March 2015, the ownership of the turbines was transferred to the PMLD, and the Wind Farm Debt was refinanced through MMWEC 3 times to restructure the loan into short-term, long-term and bond payment schedules to levelize payments and reduce the interest rate.

24/7 SCADA Monitoring of equipment and operations are in place. Business Insurance policies were purchased to protect PMLD's investment. All maintenance and repairs are performed by PMLD staff who are trained as Wind Turbine Technicians, and contracts are in place with industry corporations to provide advanced monitoring and techincal support. Weekly, Monthly and Annual inspections of both turbine are performed and documented. A healthy stock of inventory, replacement parts and pieces are stored at PMLD.

PMLD continues to actively pursue Non-Profit Entities and offer the Sale of Wind Power the turbines generate to offset the Debt Obligation. The Wind Farm Debt will be paid off in 2026. Annually on average, the Wind Farm Debt is $0.05/kwh of the $0.2475/kwh rate customers pay monthly. Visitors are welcome to walk the trail off Westminster Rd. (on Old Stagecoach Rd.) up to and around the wind turbines to get an up-close view of these machines from the ground.

Click the Data Sheet image below to bring up a larger view. 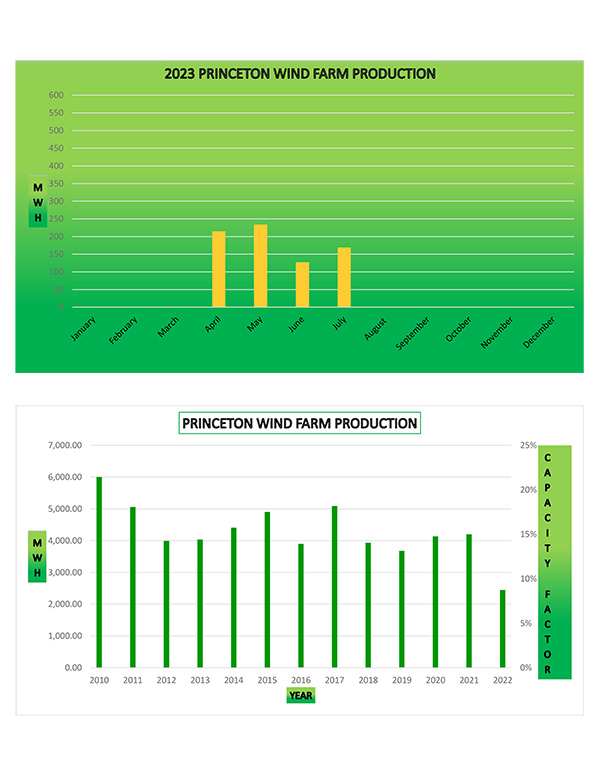